You guys, I got the memo for no-churn ice cream, but, like the rest of my junk mail, I immediately disregarded it and didn’t give it another thought.

That is, until last week when my bestie was going on and on about a recent batch of chocolate peanut butter cup no-churn ice cream. She was swooning over its silky texture and making weird google-y eyes as she was describing the luscious ribbons of melted peanut butter and melt-in-your-mouth creamy goodness.

And then she ended with the fact that it only took her 5 minutes to prepare. All of the other stuff sounds great, but ice cream in 5 minutes? I thought that was just another Internet myth. A unicorn.

Because I hate to be taken for a fool, I made her explain the process in detail.

It’s true… All of it! You can now make ice cream without having to heat the milk, temper the eggs, chill the milk mixture, and churn the ice cream base. Whoa, right?

These are new times we live in, folks. No-churn ice cream times.

I’d say yippee for technology, but technology has nothing to do with it. A high-powered mixer and a few ingredients are all you need to make your no-churn ice cream dreams a reality.

Grab yourself a carton of whipped topping, package of cream cheese, can of sweetened condensed milk, and bottle of vanilla extract and let’s get to getting, because we have ice cream to make…in the mixer.

The method is super simple. The heavy cream and vanilla extract get whipped on high speed in the bowl of a stand mixer fitted with the whisk attachment (or in a large bowl with a handheld mixer) until soft peaks form. Add the cream cheese and sweetened condensed milk and beat until smooth and combined. That’s it!

I took my grand ol’ time layering the ice cream base and adding the accoutrements. It was a relief, really.

For this No-Churn Peach Cobbler Ice Cream, I added homemade peach bourbon compote and crispy crumbles of speculoos cookies. Do yourself a favor and die now so you can come back to life and devour this ice cream. I’ll wait…

Don’t fret too much over the homemade peach compote. It’s just peaches, sugar, and a splash of bourbon at the end. Easy peasy. And, um, the speculoos cookies are courtesy of the grocery store, so… 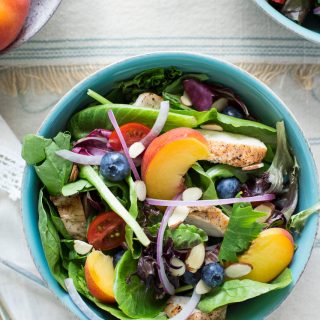 Peach Arnold Palmer with Bourbon {By the Pitcher}