Be prepared for an Apple Cider Glazed Crispy Brussels Sprouts addiction after the first bite.

Everyone has that one thing they can’t get enough of no matter how often they shovel it in their mouth. Whether it be chocolate, wine, cookies, or cake. Can’t stop, won’t stop. It never gets old–ever!

That item for me is brussels sprouts. Yeah, I know, weird. But, nevertheless, it’s the one dish I could eat every. single. day. My weekly trip to Trader Joe’s results in a cart full of brussels sprouts, and I’m not one ounce ashamed of my weird food obsession. I own it!

With the holidays quickly approaching (yikes!), I thought I would create a side dish centered around my favorite green veggie. By the way, this isn’t your average side dish, and that’s probably because I don’t do average.

The dish starts with crisping up those sprouts. In order to achieve the proper crisp, you need to crank the oven up to 400 degrees F. (no worries, it’s chilly out now) and drizzle the mini green cabbages with a generous amount of olive oil (have no fear, it’s heart healthy). When you transfer the sprouts to a sheet pan, make sure you arrange them in a single layer. Season them with a liberal sprinkling of kosher salt and black pepper before popping the pan in the oven. Roast the sprouts for 30 minutes total, giving the pan a few shakes for even roasting and maximum crisp.

When I make brussels sprouts, I like to pair them with something sweet in order to tame their natural bitterness. In this case, they’re getting a drizzle of apple cider glaze. Yes, it’s a good as it sounds. The glaze is so easy to make. Bring 2 cups of apple cider to a boil and allow it to reduce to a thin syrup. The process takes about 25-30 minutes total. The glaze will look thin, but it will thicken as it cools.

As if crispy sprouts drizzled with apple cider glaze wasn’t good enough, I went and added a few other delicious flavor elements for your tasting pleasure. ‘Cause I’m thoughtful like that.

I tossed in a handful of toasted Diamond Pecans for added crunch, and a combination of dried cranberries and golden raisins for a pop of natural sweetness.

Like I said, this isn’t your average side dish.

Brussels sprouts get roasted to crispy perfection and then tossed with toasted pecans, golden raisins, and dried cranberries. An apple cider reduction gets drizzled over the mixture for a sweet burst of fall flavor.

Disclosure: This recipe was developed for the lovely folks at Diamond Nuts. All opinions are my own. Thank you for supporting my recipes and site while I work with brands I adore. 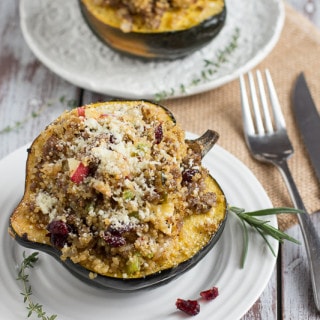