These Pumpkin Spice Sugared Donuts are soft on the inside, golden brown and crunchy on the outside, and have a sugary pumpkin spice coating.

Soft and pillowy on the inside. Golden brown and crispy on the outside. Dipped in a crunchy pumpkin spice sugar coating. It’s donut perfection, done fall-style. If you’re not pumpkin-obsessed like the rest of us, you’ll appreciate these Pumpkin Spice Sugared Donuts. They’re not pumpkin on steroids. Actually, there’s no physical pumpkin in the recipe. Instead, I opted to season the sugar with warm fall spices–cinnamon, ginger, nutmeg, and cloves. Technically, it’s pumpkin pie spice of the homemade variety, but it’s not overwhelming.

Let’s talk about the actual donut. It’s a yeast donut that has been seasoned with a pinch of cinnamon. It’s just enough cinnamon to cause you to question the underlying flavor. In other words, it’s the perfect amount.

What I love about this recipe is that the dough can be made a few days in advance and stored in the refrigerator until you’re ready to fry the donuts. If you choose to make the donuts the same day, the entire process takes approximately 1 and 1/2 hours. Not too shabby for those of us not blessed with patience (that’d be me). Seriously, these bad boys are addictive. Be prepared to blow through at least two in one sitting. 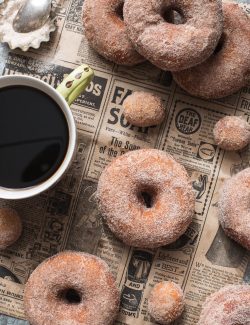 These Pumpkin Spice Sugared Donuts are soft on the inside, golden brown and crunchy on the outside, and have a sugary pumpkin spice coating.

Disclosure: This post was sponsored by Red Star Yeast. All opinions are 100% my own. Thank your for supporting me while I work with brands I love.