I stumbled through Monday, trudged through (over?) hump day, and Friday crept by brutally slow.

The good news… I made it out alive. And, I have wine to thank. 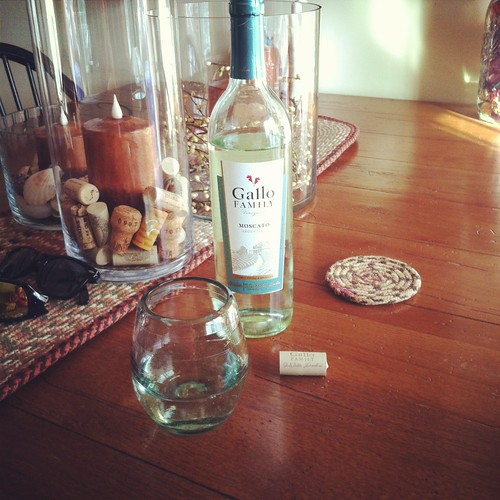 Happy Saturday, folks! Go ahead, relax. Enjoy that well-deserved cup of coffee in slow motion today. Savor every last drop before going back for seconds.

Is it just me, or does the week creep by at a snail’s pace? After the long, anticipated wait, the weekend slides by in a blur. It’s not fair, I tell ya.

Here’s my grand thought on the situation. We should even out the field a bit. Maybe a four day work week with a three day weekend. I mean, it’s only fair. Who can we take this idea to? Obama? Our local government? Someone is sure to care, right?

Lately I’ve been giving a lot of thought to becoming a nomad. The whole roaming-around-the-earth idea sounds appealing. Maybe I’ll even get a horse. Kind of like the olden days.

Squirrel has taken to calling me creepy pet names for the fun of it. I know he’s only joking, but some of the names are downright disturbing. Sugar bear. Luscious lips. And, the worst one of them all, pookie. Gag! I’m trying my damndest to ignore him. However, I don’t know how much longer I can hold out before my hand gets twitchy and gives him good love tap on the cheek.

The other day he emailed me asking me to call him. I thought he had something important to tell me, but, instead, he said, “I just wanted to hear your voice.”

I almost choked on my salad. “Wha? Where is my husband and what did you do with him?” Here’s the said salad I almost died eating thanks to Squirrel and his romantic ways. 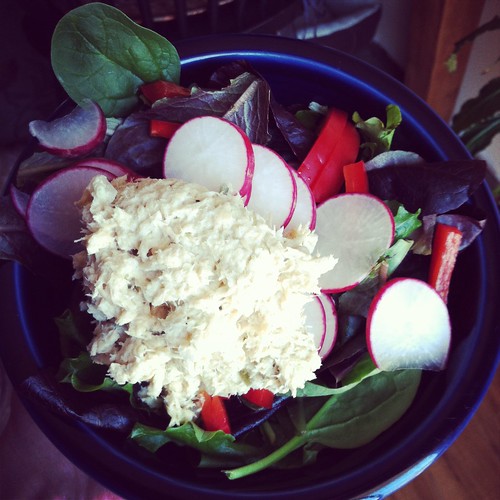 I’m not what you would call a girlie-girl. I like to play in the dirt, catch fish with my bare hands, and go frog hunting. Squirrel recognizes this and uses it against me because he knows it gets under my skin. So clever, that man.

My gal Nancy of Gotta Get Baked inspired me to share some random crap about myself after I read a few of her Random Crap posts. The girl is hilarious and brutally honest—two things I love about her. Like me, she’s a cut-the-crap-and-give-it-to-me-straight kind of gal. I wait in the dark like a creepy stalker for her posts to go live.

I’m going to call my series Crap I Should Probably Keep To Myself.

I feel like you might be still hung up on the whole frog-hunting comment. Allow me to explain. Yes, I frog hunt. I have my own frog net and everything. No, I don’t injure or harm the frogs in any way. I catch them, hold them for a bit, and let them go free. It’s the fun of the catch that I love most. Those little buggers are slimy and quick. It’s a real challenge.

Are you still there? You’re gone, aren’t you?

I can’t stand to see someone in public wearing slippers. Drives. Me. Nuts! It’s as if putting on shoes was too much of an effort. Oh, and pajamas. This week I saw a gal wearing Cookie Monster pj bottoms. So not attractive. Uggs and sweat pants, people. They’re the socially acceptable version of pjs and slippers.

I don’t watch TV. Let’s just say there’s a plane missing, which, it turns out, there is. Um, how does a huge aircraft manage to go missing? Most people read about it in the newspaper or watch a segment on their local news channel. I, however, find out about important, life-changing events through the grape vine, either from Squirrel, my coworkers, or a friendly patient. I then proceed to sit there with my jaw dropped and eyes popping out of my head, jibbering nonsensical words of utter shock.  I’m so disconnected with the world.

I have no filter. Ideas enter my brain and spew directly out. It’s a disease.

I curse like a lady sailor. You may not get that by the looks of my site (I try to keep it buried inside), but it’s true. I’m so not lady-like.

I want to smack the guy—yes, I truly believe it was a guy—who invented the bra. Only a man would create something so uncomfortable.

Spring allergies have officially moved in and have begun their seasonal river dancing session in my brain. Make it stop!

I tease my aging parents about their impending future in a padded room with a food slot where showers include the use of a hose. I’m such an upstanding daughter. The thing is, they really do think it’s a joke. Bah! 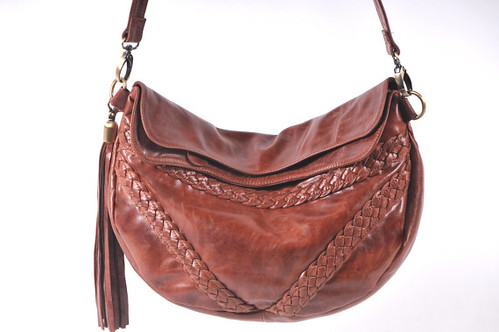 This purse. I crushed on it so much that I decided to take the plunge and purchase it. I am now the proud owner of a handmade leather cross body purse.

This One Bowl Yellow Birthday Cake with Lemon Buttercream from Movita Beaucoup. Movita agreed to make my 30th birthday denial cake…only she doesn’t know it yet.

These Double Chocolate Cadbury Eggs from Domestic Rebel. I want to eat all the eggs.

I want to prance around in this girly lace cami dress from the Loft. I’m feel pretty. Oh so pretty…

A new dress requires a new pair of shoes. These darling little flats from Anthro were love at first glance.

You, me, and a pitcher of this Blood Orange Margarita from Honestly Yum would look real good fireside. I have marshmallows! 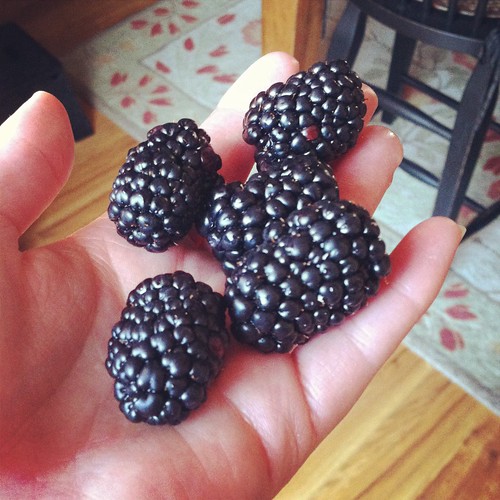 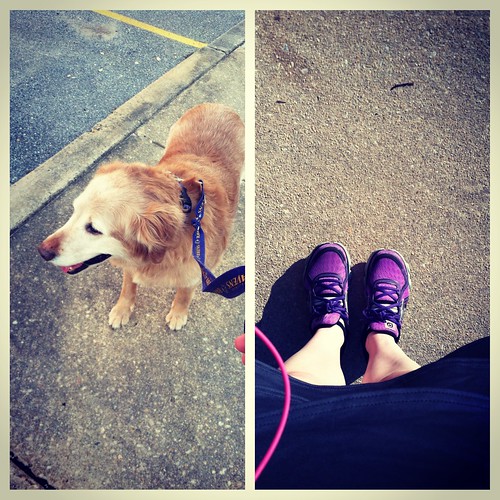 It’s finally warm enough outside to go for a run. 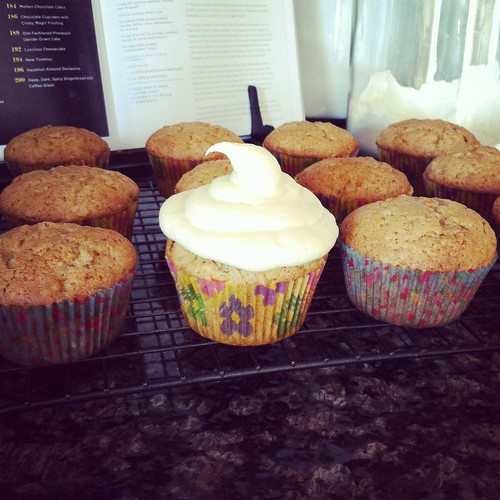 My mom’s attempt at frosting cupcakes. The first thing that came to mind when I saw it sitting on the counter was: dog turd. As Anna of Crunchy Creamy Sweet pointed out, my mom crafted the Sorting Hat from Harry Potter out of frosting. She’s secretly talented. 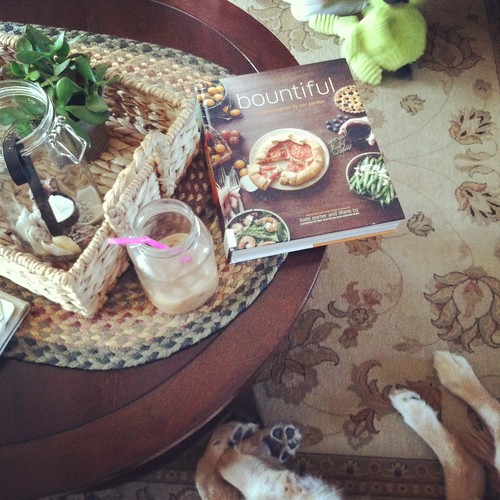 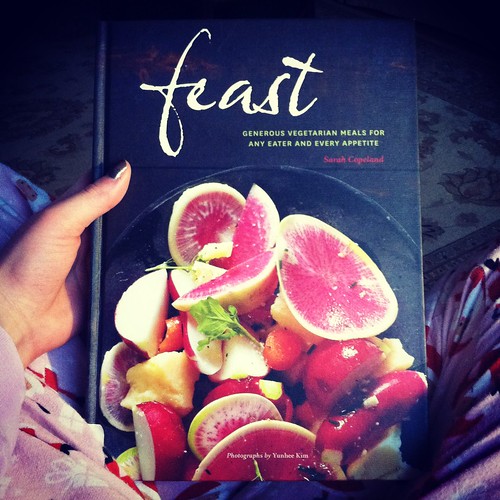 Lazy Saturday mornings with two of my new favorite cookbooks and a glass of cold-brewed iced coffee. 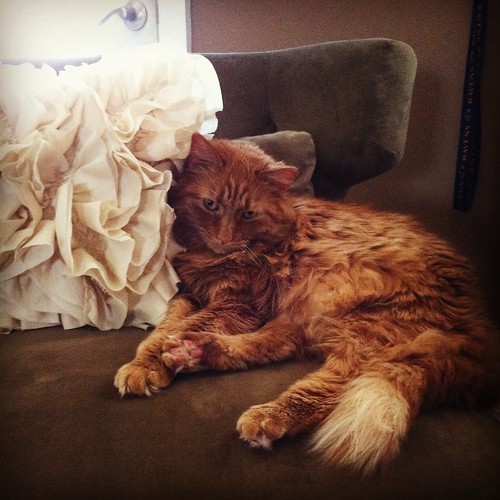 This fluffy hairball is taking over my house. 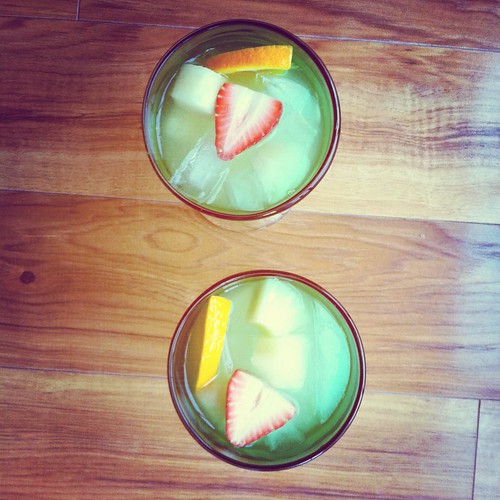 Slice of Life Saturday’s ~ Jennie Who?

7 Responses to “Slice of Life Saturday’s ~ The Wandering Nomad”