Can you smell the homemade bread baking?

The smell of homemade bread baking in the oven is one of my very favorite scents to float out of the kitchen. From the yeasty dough that hits your nostrils as you knead to the sweet, tangy scent that creeps from the oven as it bakes. Mmmm, heavenly.

I come from a long line of female bread bakers. My great grandmother on my mother’s side made the best dilly bread and a poppy seed loaf stuffed so full of poppy seeds they threatened to burst from seams. After eating a slice, we would have to check each other’s teeth for lingering seeds.

My great grandmother on my father’s side could whip up a batch of buttermilk biscuits in the blink of an eye. She lived in the south, and folks in the south know their way around a biscuit. After my great aunt died (her daughter), we travelled to Virginia for the funeral. The next morning, I woke to her churning out biscuits at warp speed, the biscuit cutter moving so fast it was a blur. It was an experience I will never forget.

My grandmom on my father’s side learned the art of bread making from her southern mother. When I was a child, I used to watch my grandmom whip up her famous dinner rolls. Since I’ve always had a passion for baking, I would perch myself on one of the stools at the island where all the magic happened, watching her every move. She would describe the process as she methodically kneaded and twisted dough between her fingers, shaping the rolls into perfectly smooth balls. I learned that she prefers shortening over butter when greasing the cast iron pan that the rolls baked in. Never scald the milk; it’s an inexcusable mistake.

I also grew up watching my father attempt to make bread. Every time, he made the inexcusable mistake of scalding the milk. His rolls were more like hockey pucks than bread. Finally, after years of torturing us with bread that could chip a tooth, he succeeded…but only after a dough explosion.

My dad and I have this ongoing battle of the bread. Even after growing up with a mother who could make bread in her sleep, he just couldn’t grasp the process. Then I entered the picture–his ever-competitive daughter. What he didn’t know at the time was that I would grow up to become utterly obsessed with food…and relentlessly competitive.

Everything became a challenge.

He taught me how to make pie crust at a young age. I now make the better pie crust.

After a few years, the tables turned. I became the teacher and he became my student. Something had to be done about his inadequate loaves of bread. Honestly, we had all been tortured enough.

Because my dad is a sneaky, sneaky man, he went behind my back and got lessons from the master herself, my grandmom (his mother).

I wasn’t supposed to know about The Great Dough Explosion. Lucky for me, my dad is the worst secret keeper alive. I found the evidence hiding in the freezer: a frozen dish rag covered with some unknown substance.

Me: Hey, mom, what’s up with this frozen rag?

Mom: Your dad blew up the…

Me: I’m sorry. I didn’t quite catch that last part. Dad blew up what?

Mom: I wasn’t supposed to tell you. He blew up the dough. Jennie, you should have seen it. The dough looked like something in the movies. It was oozing over the sides of the bowl.

Me: *runs out the back door*

I couldn’t contain my laughter any longer. I had to go find the man that caused The Great Dough Explosion.

Come to find out, he cut the bread recipe in half and forgot to do the same with the yeast.

I was no more good!

If you want to bake a successful loaf of bread, don’t be like my dad and scald the milk. The milk should not go over 110 degrees F. When the milk is too hot to keep my finger in the pot, it’s ready. If your milk comes to a boil, start over again. 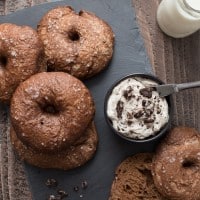