Gigantic laundry land mines litter the floor of my basement. There are piles of dirty clothes as far as the eye can see. I find laundry to be the worst chore known to mankind, and this is coming from a person who washes a ton of dishes.

There are some very organized, very disciplined people–I’m not one of them–that conquer the dirty chore with elegance and grace. Again, I’m not one of those people. Just the other day, I found myself going through the endless piles of laundry in such a way that even I was embarrassed for myself. I had no idea which piles were dirty and which were clean,so, I did what any sane person would do. I started sniffing the laundry.

Sure, some of it smelled fresh as a sunny summer’s day…until it didn’t. After sniffing a few articles of clothing, I came to a not so clean sock. I’m not going to lie, the sock was rockin’. Again, worst system ever! I tried to think back to the moment I decided sniffing potentially dirty laundry was a good idea. I came up blank. I blame the desperate moment on a lapse in my sanity.

I quickly abandoned my efforts to save time and threw all the clothes in the dirty pile. No person should ever have to sniff a dirty sock. It’s just not worth it.

I decided to ignore the ever growing piles of dirty laundry and headed to the kitchen to bake a batch of these skinny peanut butter fudge brownies.

If you’re nuts for peanut butter, these are all you.

I used my skinny fudge brownie recipe as the base for this peanut butter stuffed recipe. Why mess with a good thing, right?

See how easily the brownies come out of the pan? No mangled brownies. No mess. One even slab of chocolate-y deliciousness. Brownie success!

Wait for the brownies to cool completely before cutting them into even squares. If you cut the brownies while they’re hot, your brownies won’t cut evenly. You’ll end up with crumbs sticking to your knife and wonky, uneven squares.

I know it’s hard to wait, but it’s the price you pay for perfect brownies.

Just because we’re all watching what we eat doesn’t mean we don’t deserve a brownie. Honestly, what would life be like if there were no brownies?

Decadent fudge brownies stuffed with peanut butter and sprinkled with honey roasted peanuts made skinny for your enjoyment.

Preheat the oven to 350 degrees F. Line a 9-by-9-inch square pan with parchment that overlaps each side of the pan. Spray the pan with non-stick baking spray.

In a large bowl, whisk together the sugar and the eggs until slightly pale in color, about 1 minute. Whisk in the melted butter, Greek yogurt, and vanilla extract until combined. Whisk in the chocolate.

Using a rubber spatula, fold in the flour and salt until just combined.

Pour half the batter into your prepared brownie pan, spreading the batter evenly throughout the pan. Top with melted peanut butter. Pour the remaining batter over the peanut butter and spread evenly. Sprinkle with honey roasted peanuts.

Bake for 25-28 minutes, or until a toothpick inserted into the center comes out mostly clean (a few crumbs are okay).

Allow the brownies to cool in the pan for 15 minutes before removing and transferring to a wire rack to cool completely. Cut brownies into squares using a serrated knife. 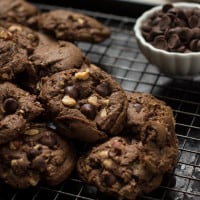