I’ve been mixing up a lot of cocktails lately. I love concocting summery alcoholic beverages. Last week I found a recipe for a cocktail called the Latin Lover on SheKnows, an article written by Claire Gallam from The Realistic Nutritionist. I didn’t realize it at first, but it’s a skinny cocktail. I had my doubts at first, but after tasting it, those doubts disappeared. It’s one delicious cocktail. If I didn’t tell you it was skinny, you’d never be able to tell.

The recipe calls for Voli orange vanilla fusion vodka. Apparently, it has 25% fewer calories than regular vodka, and it’s made with French wheat. I suppose that’s what makes it healthier than regular vodka. I thought I’d have trouble finding it because it’s fairly new, but there it was on the shelf at my regular liquor store. I realized it was a skinny cocktail when I checked out at the liquor store.

Me: Hmm, I thought I was going to have trouble finding this particular vodka.

Salesman: Did you see it in an article or something?

Me: Actually, I found the recipe on a website. I’ve never heard of the stuff.

Salesman: Yeah, it’s pretty popular. It has fewer calories than regular vodka. Most people just mix it with club soda.

Me: Fewer calories? Ewww! I don’t know. Does it still taste good?

So, I bought it. Looking back, the recipe called for sugar-free lemonade, pineapple juice, and agave nectar. How could I have missed all the “skinny” signs? Well, I did. I’m so glad I decided to give it a try because now it’s one of my favorite summer cocktails.

I adapted the recipe to make a full pitcher because I’m not a fan of mixing up individual drinks when I have guests over.

This cocktail is fresh, crisp, and fruity. My guests loved them. They were convinced that they didn’t have alcohol in them, but I can assure you they do. And, a lot of it. They go down so smooth.

When I told them it was skinny, they were all shocked. “No way! But it’s so good; it doesn’t taste skinny,” is the reaction I got from my girlfriend as she was guzzling it down. For some reason we relate low fat and low calories to tasting bad, but that’s just not the case most of the time. If something is made with fresh, wholesome, natural ingredients it’s going to taste amazing, and this drink does.

In a pitcher, add the vodka, pineapple juice, lemonade, agave nectar, and lemon slices. Stir. Store in the refrigerator until completely chilled.

Add ice to a fancy glass, pour in some of the cocktail mixture, and top with a splash of club soda to taste. Add a lemon slice to the glass and enjoy. 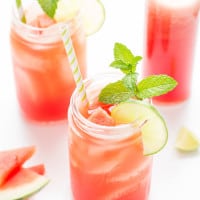