Sometimes I use baked goods as a form of apology.

Take the other day, for instance. I was up in the attic collecting my fall decorations when I tripped over a random box of crap. I was able to cling to one of the roof beams to save myself from falling backwards down the attic steps (thank you, Jesus), but not before one of my legs went right through the ceiling–oops!

I pulled my leg out of the ceiling and proceeded to descend the attic stairs to access the damage, all the while singing everything’s gonna be all right.

It was not all right. It was far from all right. Sure enough, I managed to bust right through the newly renovated second floor ceiling–oops, again?

How do you tell a man that just spent a gazillion man hours making your upstairs look purdy that you took a dive through his freshly plastered and painted ceiling?

You don’t. You cover up the damage and hope the other person never finds out–kind of like I did with the hole in the living room wall. However, this was a ceiling, and there was no way I was going to cover up the gaping hole with our wedding photo.

I was forced to tell the truth. That’s where this recipe for cinnamon swirl loaves from Red Star Yeast come in; because there’s no better way to say I’m sorry for falling through the ceiling than with two loaves of sweet, buttery cinnamon bread piping hot from the oven.

Here’s how the conversation played out:

Me: I made you two–not one, but two–loaves of cinnamon swirl bread. *walking away with speed* And, I’m sorry for falling through the second floor ceiling.

Squirrel: *holding the bread pan* Um… Hold on, what?

And that’s how you tell the truth. It works every time.

This recipe makes two gorgeous loaves of homemade bread swirled with a layer of melted butter, cinnamon, brown sugar, and toasted pecans. The scent of yeast and cinnamon that fills your house as the loaves bake will have you wanting to bake bread every day for the smell alone.

I used Red Star Platinum Yeast in the recipe. Their Platinum Yeast increases volume and strengthens the dough. You’ll get a higher rise with more spring and a softer texture. They don’t call is superior for nothing. I reach for a packet every time I bake a loaf of homemade bread.

The swirl alone will have you coming back for seconds and thirds. 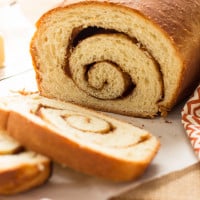 If you don’t have bread flour handy, substitute with equal amounts of all-purpose flour. 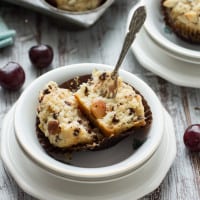